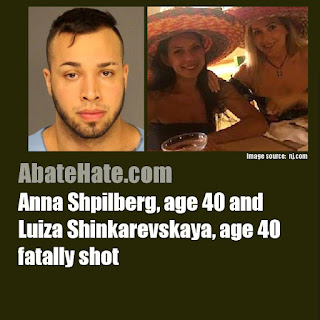 Charged with two counts of first-degree murder is John Menendez, 23. Menendez is a corrections officer in Hudson County, reports say.

The Hudson County corrections officer charged in the shooting deaths of his girlfriend and her best friend in Newark confessed the killings to a police officer before he was arrested, according to court documents.

John Menendez, 23, of West New York, is charged with two counts of first-degree murder in the deaths Tuesday night of his girlfriend Anna Shpilberg and her best friend Luiza Shinkarevskaya, both 40 and Morris County residents. The women were found fatally shot in the head in different parts of Newark. They had just returned home from a trip and Menendez picked them up at Newark airport, authorities said.

[‘I killed both of them. Just arrest me, bro,’ corrections officer told cop after he shot girlfriend, her friend, authorities say, By Anthony G. Attrino, nj.com, February 19, 2021]