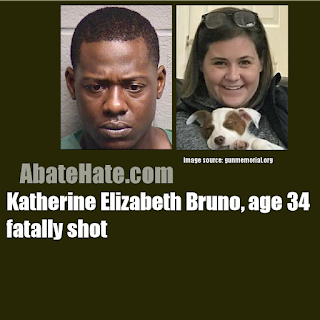 Charged with one count of murder is Dominique Lamont Arrington, 32.

Newsobserver.com reports that Arrington had previously been convicted of murder when he was 16 years old. "He spent six and half years in prison, plus almost two years in jail awaiting trial," the report said.

A Durham man convicted of murder as a teen has been charged with murder again in the fatal shooting of a woman this week just off of Chapel Hill Road.

Officers responded around 8:15 a.m. Tuesday to a home on Huron Street, where they found Katherine Bruno, 34, who had been shot; she was pronounced dead at the scene.

[He killed a man as a teen. Now he’s charged with fatally shooting a woman in Durham, By Ashad Hajela, newsobserver.com, February 17, 2021]