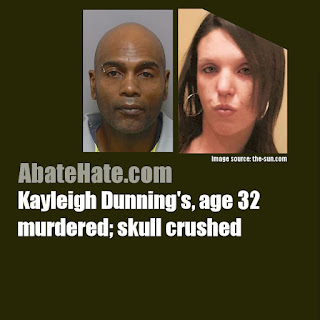 Mark Brandford, 49, was accused, tried, and convicted of the crime.

Brandford allegedly killed Dunning by crushing her head shortly after proposing to her. Reports say the suspect sent obscene photos to the victim's family and others to create the illusion that she was being stalked.

Brandford was found guilty in a court of law in February, 2021. The crime occurred in 2019.

A JEALOUS lover has been found guilty of murdering his partner after he sent sex tapes and intimate photos of her to her family to "create the illusion" she had a crazed stalker.

Evil Mark Brandford, 49, crushed Kayleigh Dunning's skull in a "vicious" attack the same night he proposed to her, having devised a "cold and calculated" plan.

In the year before he "brutally" murdered Miss Dunning, 32, he created the impression she had a mysterious enemy by pretending someone else had stolen her phone and using it to share explicit videos of the couple having sex.

Brandford, a street sweeper, sent the images to the cleaner's family and bosses as well as sending her anonymous threats including "I'm going to f**k you up big time".

[PURE EVIL Jealous lover GUILTY of murdering girlfriend after he sent sex tapes to her family to ‘create illusion’ she had stalker, by Sarah Grealish, the-sun.com, February 22, 2021]