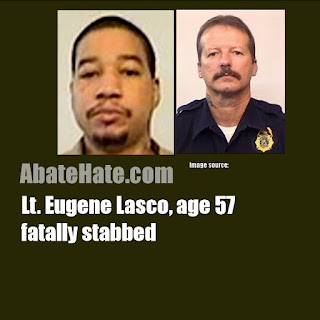 Arrested after the incident is Tymetri Campbell, 38.

The confrontation occurred at the Indiana State Prison where Campbell is an inmate and Lasco was a guard. Reports say Lasco came to the aid of another guard who had been stabbed when Campbell allegedly stabbed Lasco.

Reports say Campbell was serving a 130 year sentence for homicide. The death of Lasco provides an argument in favor of the death penalty.

The correctional officer killed in Sunday’s stabbing at the Indiana State Prison has been identified. Lieutenant Eugene Lasco died from his injuries, after he was attacked by an offender, according to the Indiana Department of Correction. Lasco was 57 years old, lived in LaPorte County, and had worked at the prison since 2009.

The IDOC says that around 2:30 Sunday afternoon, an offender attacked Sergeant Padrick Schmitt, stabbing him multiple times. Lieutenant Lasco reportedly went to help, when he himself was stabbed.
Sgt. Padrick Schmitt

Schmitt is 22 years old and began his career at the prison in 2016. He had just been promoted to sergeant on February 7. The IDOC says Schmitt is currently in stable condition after being transferred to Memorial Hospital in South Bend.