Autumn Steele: The white Breonna Taylor you never heard about 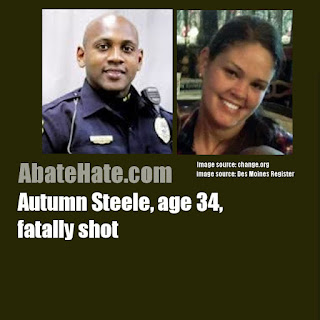 AbateHate.com — The unarmed Autumn Steele, age 34, was fatally shot in Burlington, Iowa by a police officer. Steele was white. The officer was black. The incident was captured on video during which the officer, Jesse Hill, was heard saying, "I'm going to jail."

Reports say Hill responded to a domestic dispute call. Upon arriving he found Steele and her husband, Gabriel, in a physical altercation. Gabriel was holding a child.

Hill claims he fired twice at the family dog. One of those shots reportedly ricocheted and struck Autumn in the torso. She later died from the injuries.

An investigation concluded that the dog was not vicious, according to wikipedia.com. Hill reportedly was treated for at least one dog bite, Des Moines Register reported.

The attorney cited a portion of the law that says involuntary manslaughter, as an aggravated misdemeanor, is punishable “when the person unintentionally causes the death of another person by the commission of an act in a manner likely to cause death or serious injury.”

We will never know if Officer Hill was guilty of wrong doing because there were no criminal charges laid against him.

Video of the gravely injured Autumn laying on the ground in obvious pain was published by the Des Moines Register. You may view it above.

We know of no protests or riots that occurred in response to Autumn Steele's untimely death at the age of 34.

The shooting occurred when Hill was responding to a domestic dispute in Burlington on Jan. 6. At the scene, Hill fired his weapon twice to stop an attack by a German shepherd, according to the Associated Press.

One round hit Steele in the middle part of her torso. She was later pronounced dead at a hospital.

Authorities said Hill was treated at the Great River Medical Center for at least one dog bite, and was later released.