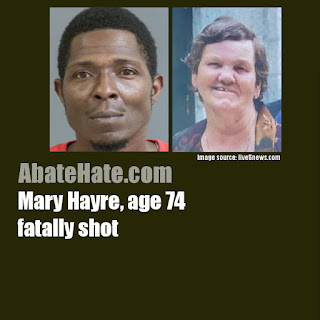 Arrested after the incident was 41-year-old Zaswan E. Rosendary who was charged with murder and possession of a firearm during the commission of a violent crime, according to abcnews4.com.

The victim was apparently shot in her vehicle in an apartment complex parking lot where she intended to retrieve a cell phone left behind by a grandson. Hayre was on the phone with her daughter, Pamela Geridore, when she was allegedly shot to death.

Geridore said she was on the phone with her mother when it happened. She thought it was a car crash.

“All I heard was boom, boom, boom and her saying, ‘Oh my God, oh my God,’ and it kind of sounded like a choking sound,” Geridore said. “I was like momma momma, I kept calling her and she won’t answer me so I was just thinking the seatbelt got stuck around her neck or something.”

Her daughter says she thought the noises came from her hitting three cars in a crash.

“In reality those were gunshots,” Geridore said.